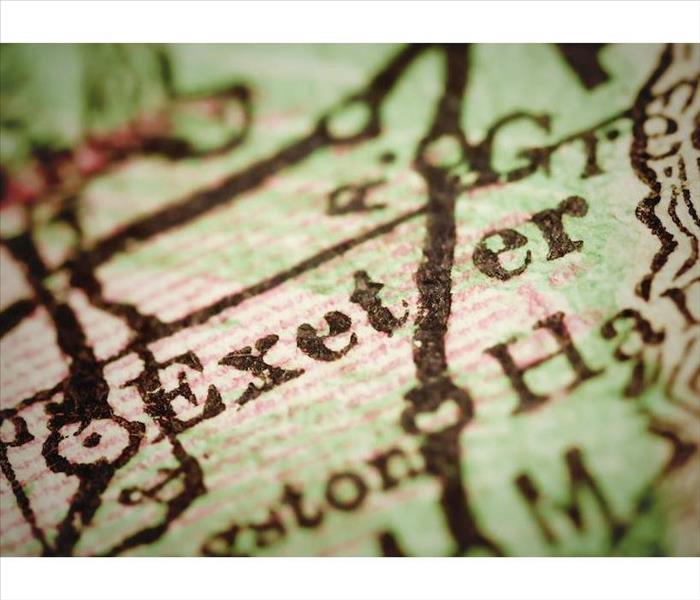 Our dedicated technicians at SERVPRO will restore every level of fire damage on your property "Like it never even happened."

Exeter Gets its Name from the Same Town in Devon, England

The town of Exeter has a long and varied past. Grist and lumber mills were established early in the life of the village in the 1600s. Many residents and settlers spent their days hunting and fishing, planting, and expanding farms. Some raised cattle and swine. At the same time, others made cedar shakes as well as barrel staves.

The town was named after a similar village in Devon, England, and founded by the Reverend John Wheelwright. At the time, there were approximately 35 families with a total of 175 souls who moved from the Boston area, with Wheelwright to establish Exeter with the freedom to follow their own religious beliefs. The initial years for the settlers were challenging. However, they persevered and became established in the area.

Exeter is located near the waterfalls where the Exeter River meets the tidal Squamscott River. The waterfalls provided power for a local grist mill and later a sawmill. Access to the tidal Squamscott offered easy access to neighboring towns and many locations further afield to trade goods. Travel by river was one of the significant transportation modes in those early days of life in the small village.

The area prospered and began trading with neighboring towns as well as across the ocean to Europe. They became successful shipbuilders, lumbermen, and statesmen. A member of the Gilman family, Nicholas Gilman, became one of the founding fathers. The families populated government positions in the general assembly and the judicial courts. The last Indian raid took place in 1725.

History buffs can visit the following museums and important locations to explore further Exeter's history, contributions to the local environment, the state of New Hampshire, and the United States:

The church in Exeter passed through several iterations before becoming the magnificent historical building it is today. In the 1600s, every town must have a church to receive a charter. The Reverend John Wheelwright established this church in Exeter in 1638. The current building dated back to 1798 and was seen as a call for American Independence. The church and its members played a pivotal part in the daily life of the town of Exeter.

Take A Walking Tour Around Exeter and Experience History

Walking tour pamphlets can be obtained from the Exeter Historical Guide. The guide explains the history of many of the buildings along Front and Water streets. Notable buildings along the way include:

Not only is Exeter rich in history, having been founded in 1638, there are many events taking place throughout the year, attracting many residents as well as tourists. Note: Visitors should check local schedules to confirm the status, given current social distancing requirements and local and state authorities' guidelines. A sampling of the events includes:

Brass band concerts at the Bandstand

Fall Festivals including the UFO Festival

The Bandstand is located in the center of town and is home to concerts during many summer nights. Listen, sing-along, or dance to various genres, including pop, country tunes, rock, and folk music. Many people bring blankets and snacks to enjoy their summer evenings listening to great music.

On labor day weekend, the Exeter Area Kiwanis Club hosts a UFO festival to celebrate "The Incident at Exeter," which occurred over 55 years ago. Norman Muscarello informed police of a UFO he saw hovering behind a barn. The sighting was later confirmed by local police, who also saw the UFO. The sighting garnered national attention as investigators tried to assess what Norman observed that night.

Speakers are invited to discuss the event and recent history regarding UFOs. Talks are presented at the Exeter Town Hall. Visitors can also purchase speaker's books on subjects associated with UFO's. There are trolley rides to the observation site and activities for the kids to enjoy.

The Exeter Holiday Parade usually takes place on the first Saturday of December. Residents can view the parade as it travels along Portsmouth Avenue. The town also features a Christmas Light Display enjoyed by everyone. The Festival of Trees, sponsored by the Chamber of Commerce, is a fundraising event. Proceeds support the Chambers Children's Fund using a silent auction approach.

Fires can be devastating. The damage from the fire, the odor of smoke everywhere, and the damage added by the firemen as they control the fire can be extensive. Early warning systems such as fire and smoke detectors can provide occupants with a chance to save their lives and enable the fire department to control the fire before the damage becomes extensive.

SERVPRO fire damage restoration teams have seen the difference in damage in homes with and without a smoke detector. Regardless of the degree of fire damage, our highly trained technicians can restore your home or business to its pre-fire condition. Once the fire department is left the scene, our technicians:

Assess the damage and plan the restoration project

Install deodorizing equipment to remove odors from the entire home

We have the training, the experience, and the equipment to return your home to its original condition, "Like it never even happened."

SERVPRO of The Seacoast, Dover-Rochester, Durham, provides fire damage services to Portsmouth residential and commercial business customers and the surrounding area. Call (603) 433-4300. We are available 24/7to help with all your fire damage needs.